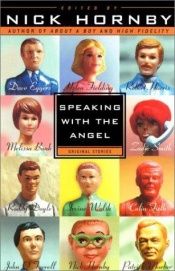 Speaking with the Angel

Speaking with the Angel is a collection of short stories edited by Nick Hornby and published by Riverhead Trade in 2001. Featuring stories from twelve established writers, the book acted as a fundraising effort for TreeHouse, a charity school for severely autistic children in London where Hornby's son was a student.
The stories collected in the book include:
"PMQ" by Robert Harris
"The Wonder Spot" by Melissa Bank
"Last Requests" by Giles Smith
"Peter Shelley" by Patrick Marber
"The Department of Nothing" by Colin Firth
"I'm the Only One" by Zadie Smith
"NippleJesus" by Nick Hornby
"LuckyBitch" by Helen Fielding
"The Slave" by Roddy Doyle
"Catholic Guilt" by Irvine Welsh
"After I Was Thrown in the River and Before I Drowned" by Dave Eggers
"Walking into the Wind" by John O'Farrell