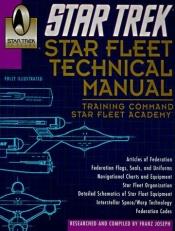 The Star Trek Star Fleet Technical Manual is a fiction reference book by Joseph Schnaubelt Franz, about the workings of Starfleet, a military, exploratory, and diplomatic organization featured in the television series, Star Trek.
Although it is fiction, the book is presented as an in-universe collection of factual documents, describing the 23rd century Starfleet and United Federation of Planets, and it is described as having been accidentally sent from the future to the 20th century--specifically, when as described in "Tomorrow Is Yesterday," the Enterprise was accidentally propelled back in time in a freak mishap, causing the manual's contents to be accidentally downloaded into the main computers of the now-closed Omaha Air Force Station.