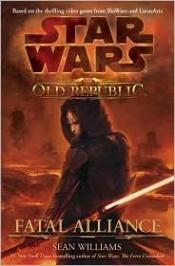 Star Wars: The Old Republic: Fatal Alliance is a science fiction novel from the Star Wars franchise written by Australian author Sean Williams. It is a prequel to and the first novel based on the MMORPG Star Wars: The Old Republic by BioWare Corp., and was released on July 20, 2010. The novel was first announced on November 10, 2008 by Sue Rostoni, the executive editor at Lucas Licensing, on the Starwars.com message boards.
This is the fifth of six Star Wars novels by Sean Williams, who also wrote the Force Heretic trilogy from the New Jedi Order series and the novelization of the 2008 video game Star Wars: The Force Unleashed and its sequel.

My favorite of the standalone Old Republic novels. This one was gripping, in its multi-stage story. It felt rather operatic. It was large scale, and just became so grandiose by the end that I could not help enjoying!

Heir to the Empire