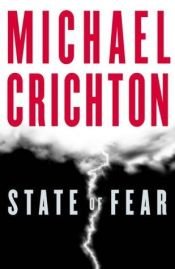 State of Fear is a 2004 techno-thriller novel by Michael Crichton in which eco-terrorists plot mass murder to publicize the danger of global warming. Despite being a work of fiction, the book contains many graphs and footnotes, two appendices, and a twenty-page bibliography in support of Crichton's beliefs about global warming. Climate scientists, science journalists, environmental groups and science advocacy organisations dispute Crichton's views on the science as being error-filled and distorted, and it was described as "pure porn for global warming deniers" by journalist Chris Mooney.
The novel had an initial print run of 1.5 million copies and reached the #1 bestseller position at Amazon.com and #2 on the New York Times Best Seller list for one week in January 2005. The novel itself has garnered mixed reviews, with some literary reviewers stating that the book's presentation of facts and stance on the global warming debate detracted from the book's plot.