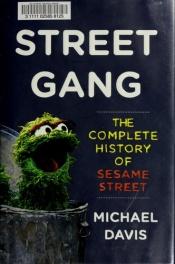 Street Gang: The Complete History of Sesame Street is a non-fiction book chronicling the history of the children's television program, Sesame Street. Street Gang is journalist and writer Michael Davis's first book, published by Viking Press in 2008. On bookshelves in time for the show's 40th anniversary in 2009, the book developed out of a TV Guide article Davis wrote to commemorate the show's 35th anniversary in 2004. Davis spent five years researching and writing the book, and conducted hundreds of interviews with the show's creators, cast, and crew.
Street Gang begins with a description of Muppet creator Jim Henson's 1990 funeral, from the perspective of co-creator Joan Ganz Cooney. Its first twelve chapters describe the origin, development, and early years of Sesame Street and the Children's Television Workshop, the organization created to oversee the production of the show and other projects. Davis includes the biographies of many of the key people involved with the creation and production of Sesame Street. Subsequent chapters chronicle the rest of the show's history, up to its 40th anniversary in 2009.
Reviews of Street Gang were mostly positive.

Storyteller : the life of Roald Dahl

The making of Pride and Prejudice

The Simpsons Forever: the Complete Guide to Our Fav …

The Physics of Star Trek