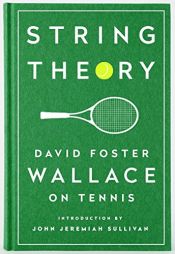 An instant classic of American sportswriting—the tennis essays of David Foster Wallace, “the best mind of his generation” (A. O. Scott) and “the best tennis-writer of all time” (New York Times)

Gathered for the first time in a deluxe collector's edition, here are David Foster Wallace's legendary writings on tennis, five tour-de-force pieces written with a competitor's insight and a fan's obsessive enthusiasm. Wallace brings his dazzling literary magic to the game he loved as he celebrates the other-worldly genius of Roger Federer; offers a wickedly witty disection of Tracy Austin's memoir; considers the artistry of Michael Joyce, a supremely disciplined athlete on the threshold of fame; resists the crush of commerce at the U.S. Open; and recalls his own career as a "near-great" junior player.

The Inner Game of Tennis: The Mental Side of Peak P …

Levels of the Game

Getting a Grip: On My Body, My Mind, My Self

When No One Was Looking

The Flame of Adventure