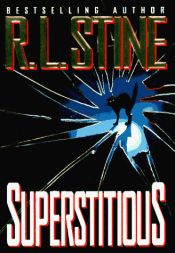 Superstitious is a 1995 horror novel by author R.L. Stine. This was the first adult novel by Stine, most famous for writing children's fiction such as the Goosebumps series. This book deals with Sara Morgan, who falls in love with Liam O’Connor. It was published on September 14, 1995 by Grand Central Publishing in the United States.
R. L. Stine began writing this book after an agent offered him a one million dollar advance. It took him four months to write.