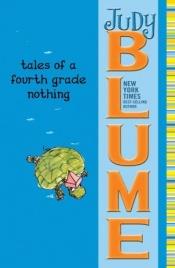 Tales of a Fourth Grade Nothing is a children's novel written by Judy Blume and published in 1972. It is the first in the Fudge series and was followed by Superfudge, Fudge-a-Mania, and most recently by Double Fudge. Although Otherwise Known as Sheila the Great features many of the same characters as the series, it does not fit exactly in the continuity of it because it only focuses on Peter's classmate, Sheila Tubman.
Originally, the book featured illustrations by Roy Doty, but all post 2002 reprints of the book have omitted the pictures.
The story focuses on a nine-year-old boy named Peter Warren Hatcher and his relationship with his two-year-old brother Farley Drexel "Fudge" Hatcher. Farley hates the sound of his legal name, and prefers Fudge for any and all occasions.