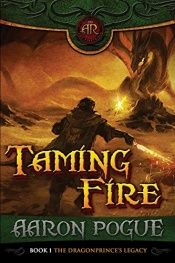 Daven Carrickson grew up as a beggar in the filthy alleys beneath the shadows of the palace. He's the son of a known thief, disgraced and despised. His only real talent is his ability with a sword, and his only real chance at finding honor or a home is a desperate dream of joining the King's Guard.

Then Daven receives a new future when Master Claighan invites him to study magic at the Academy. The wizard offers to make him into a new kind of soldier: a swordsman equally skilled with forged blades and mystic forces. It only helps that Daven has no home, no family, and nothing left to lose.

But when conspiring forces destroy the wizard's plans, Daven finds himself wanted for treason and murder. Hunted by a great black beast of a dragon, caught between the King's Guard and a rebel force led by a rogue wizard, Daven's only hope of surviving is to become more than he's ever dreamed possible.

Taming Fire is the first book in the Dragonprince's Legacy.

The Death of the Necromancer