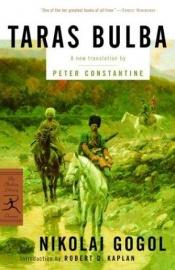 Taras Bulba is a romanticized historical novella by Nikolai Gogol. It describes the life of an old Zaporozhian Cossack, Taras Bulba, and his two sons, Andriy and Ostap. The sons study at the Kiev Academy and then return home, whereupon the three men set out on a journey to Zaporizhian Sich located in Southern Ukraine, where they join other Cossacks and go to war against Poland.
The main character іs based on several historical personalities, and other characters are not аs exaggerated or grotesque as was common in Gogol's later fiction. The story can be understood in the context of the Romantic nationalism movement in literature, which developed around a historical ethnic culture which meets the Romantic ideal.
Initially published in 1835 as part of a collection of stories, it was criticised by Russian authorities for being "too Ukrainian". This, together with Gogol's own changing political and aesthetic views, led the author to rewrite and expand the story for a markedly different second edition published in 1842 and expressing greater Russian nationalist themes.