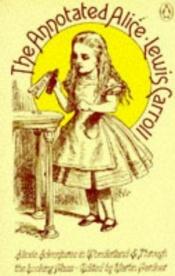 The Annotated Alice is a work by Martin Gardner incorporating the text of Lewis Carroll's major tales: Alice's Adventures in Wonderland and Through the Looking-Glass as well as the original illustrations by John Tenniel. It has extensive annotations explaining the contemporary references, mathematical concepts, word play, and Victorian traditions featured in the two books.
The original book was first published in 1960. It has been reprinted several times and translated into French, Italian, Japanese, Portuguese, Russian, Spanish, German and Hebrew.
In 1990, a sequel, More Annotated Alice, was published. This sequel does not contain the original side notes, and Tenniel's illustrations are replaced by those of Peter Newell. It also contains the "suppressed" chapter "The Wasp in a Wig", which Carroll omitted from the text of Through the Looking-Glass on Tenniel's recommendation.
In 1999, The Definitive Edition was published. It combines the notes from both works and features Tenniel's illustrations in improved quality.
Gardner also compiled a companion volume, The Annotated Snark, dedicated to Carroll's classic nonsense poem The Hunting of the Snark.