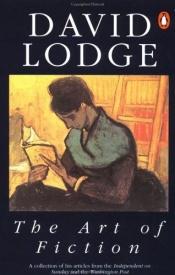 The Art of Fiction

The Art of Fiction is a book of literary criticism by the British novelist David Lodge. The chapters of the book first appeared in 1991-1992 as weekly columns in The Independent on Sunday and were eventually gathered into book form and published in 1992. The essays as they appear in the book have in many cases been expanded from their original format.
Lodge focuses each chapter upon one aspect of the art of fiction, comprising some fifty topics. Every chapter also begins with a passage from classic or modern literature that Lodge feels embodies the technique or topic at hand. Some of the topics Lodge analyzes are Beginning, The Intrusive Author, The Epistolary Novel, Magic Realism, Irony and Metafiction. Among the authors he quotes in order to illustrate his points are Jane Austen, J. D. Salinger, Henry James, Virginia Woolf, Martin Amis, F. Scott Fitzgerald and even himself.