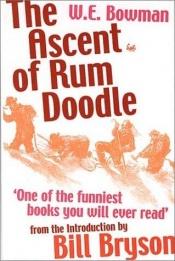 The Ascent of Rum Doodle

The Ascent of Rum Doodle is a short 1956 novel by W. E. Bowman. It is a parody of the non-fictional chronicles of mountaineering expeditions that were popular during the 1950s, as many of the world's highest peaks were climbed for the first time. A new edition was released in 2001 with an introduction by the contemporary humorist Bill Bryson. It has been critically well received. Though a parody, it has become one of the most famous and celebrated books of mountaineering literature.
The book has been republished several times since 1956. The current edition is published by Pimlico, an imprint of Random House. It was included as one of the '1000 Novels Everyone Must Read' in the Guardian in January 2009.

Psmith in the City

He Died with a Felafel in His Hand

In God We Trust: All Others Pay Cash