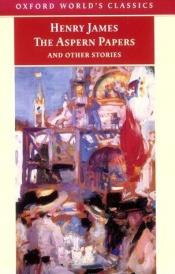 The Aspern Papers and Other Stories

An American editor with an enthusiasm for the works of Jeffrey Aspern, a romantic poet of the early 19th century, goes to Venice to acquire the letters that Aspern wrote to his mistress, a Miss Bordereau, whom he called "Juliana." Under an assumed name he rents a suite in the ancient palace where she lives in poverty and seclusion with her niece, Miss Tina. He finds that the old lady is shrewd and haughty and accepts him as a lodger only to put aside money for the future of Miss Tina, a timid, unattractive spinster much in awe of her aunt. During his residence with them, the editor wins the friendship of Miss Tina, to whom he reveals his mission. Leaving Venice for a fortnight, he returns to find that Miss Bordereau has died. Miss Tina, who is clearly in love, welcomes him expectantly, but confesses that she could only give him the papers if he were "a relative."

In addition to "The Aspern Papers," this collection contains "The Private Life," "The Middle Years," and "The Death of the Lion," as well as prefaces by Henry James, a chronology of his life, and editor's notes.

Moby Dick: Or, the White Whale (An Abridged Edition …