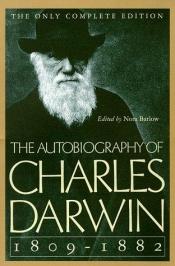 The Autobiography of Charles Darwin

The Autobiography of Charles Darwin is the autobiography of the British naturalist Charles Darwin which was published in 1887, five years after his death.
Darwin wrote the book, which he entitled Recollections of the Development of my Mind and Character, for his family. He states that he started writing it on about May 28, 1876 and had finished it by August 3.
The book was edited by Charles Darwin's son Francis Darwin, who removed several passages about Darwin's critical views of God and Christianity. It was published in London by John Murray as part of The life and letters of Charles Darwin, including an autobiographical chapter.
The omitted passages were later restored by Darwin's granddaughter Nora Barlow in a 1958 edition to commemorate the 100th anniversary of the publication of The Origin of Species. This edition was published in London by Collins under the title of The Autobiography of Charles Darwin 1809-1882. With the original omissions restored. Edited and with appendix and notes by his granddaughter Nora Barlow.
The original is in the public domain as its copyright has expired, but the later version remains under copyright. Both are available online at Darwin Online.

The Voyage of the Beagle

The outermost house: A year of life on the Great Be …