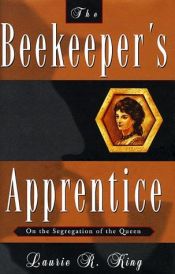 The Beekeeper's Apprentice, Or On the Segregation of the Queen is the first book in the Mary Russell series by Laurie R. King. It was nominated for the Agatha best novel award and was deemed a Notable Young Adult book by the American Library Association.
In this novel, King presents the first meeting between fifteen-year-old Mary Russell, the young Jewish-American protagonist, and Sherlock Holmes. Their meeting leads to a collaboration between the two, though this first novel focuses primarily on the detective training that Holmes gives to Russell. The series that this novel begins currently stands at fourteen novels, with the latest having been published in February 2015.

A Monstrous Regiment of Women

The Adventures of Sherlock Holmes

An Unsuitable Job for a Woman