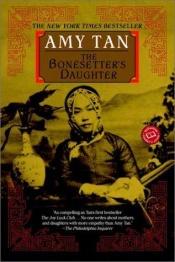 The Bonesetter's Daughter, published in 2001, is Amy Tan's fourth novel. Like much of Tan's work, this book deals with the relationship between an American-born Chinese woman and her immigrant mother.
The Bonesetter's Daughter is divided into two major stories. The first is about Ruth, a Chinese-American woman living in San Francisco. She worries that her elderly mother, Lu Ling, is gradually becoming more and more demented. Lu Ling seems increasingly forgetful, and makes bizarre comments about her family and her own past.
The second major story is that of Lu Ling herself, as written for Ruth. Several years earlier, Lu Ling had written out her life story in Chinese. Ruth arranges to have the document translated, and learns the truth about her mother's life in China.

Tears of the Giraffe