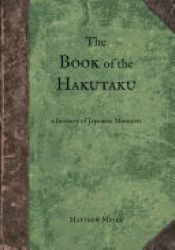 The Book of the Hakutaku

Ancient legend tells of an encyclopedia called The Book of the Hakutaku, which was given to the emperor by a magical beast. This book contained information about all the spirits, gods, and demons in the universe. It was lost long ago, but parts of it were copied down. People have been collecting information about the spirit world in supernatural encyclopedias ever since.

Throughout Japan's history, artists have gathered folklore from various sources and bundled them into illustrated, multi-volume encyclopedias. As demand grew, artists looked back into literature and history for inspiration. They copied monsters from ancient Chinese classics, reinterpreting them through a Japanese lens. They even invented new yōkai based on puns and reflecting contemporary societal issues. Today, the tradition of collecting and retelling yōkai stories remains strong.

This bestiary contains over 100 illustrated entries covering a wide variety of Japanese monsters, ghosts, and spirits. Some of them are native to Japan, while others have been incorporated into Japanese folklore from foreign cultures. Each entry is described in detail, including its habitat, diet, origin, and legends based on translations from Japanese texts.