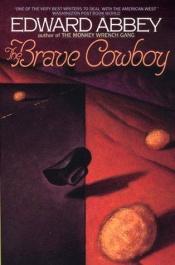 The Brave Cowboy: An Old Tale in a New Time

The Brave Cowboy was Edward Abbey's second published novel. The first-edition of the book is considered the rarest of Abbey's eight novels. There was only one printing of 5,000 copies and many of them have not survived. One online rare book dealer shows copies of the first U.S. edition start at $4,000 and the highest asking price is $10,000.
In 1993 Dream Garden Press produced a special limited edition of the book that includes an introduction by Kirk Douglas, who was the star in the film made about the book. It also includes photos from the film. Douglas signed 500 copies of that special edition.