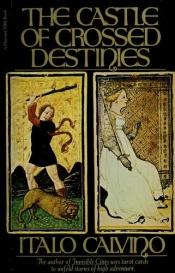 The Castle of Crossed Destinies

The Castle of Crossed Destinies is a 1973 novel by the Italian writer Italo Calvino. Its narrative details a meeting among travelers who are inexplicably unable to speak after traveling through a forest. The characters in the novel recount their tales via Tarot cards, which are reconstructed by the narrator. The novel is in two parts, each using a different style Tarot deck. The first part was published alone in 1969 as Tarocchi: Il mazzo visconteo di Bergamo e New York. The second part, with the header "The Tavern of Crossed Destinies", features the Tarot of Marseilles.
The novel is an exploration of how meaning is created, whether that be written via words or by images. It is, as often in Calvino's works, multi-layered, and several levels of interpretations and readings are possible, based on the author–narrator–character–reader relationship.