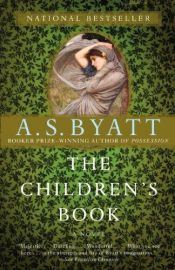 Novel by A. S. Byatt

The Children's Book is a 2009 novel by British writer A.S. Byatt. It follows the adventures of several inter-related families, adults and children, from 1895 through World War I. Loosely based upon the life of children's writer E. Nesbit there are secrets slowly revealed that show that the families are much more creatively formed than first guessed. It was shortlisted for the 2009 Man Booker Prize.
The Wellwood family are Fabians, living in a world of artists, writers, craftsman, all moving into new ways to express art, and living an artful life, before the horrors and loss of the Great War. While the central character of Olive is a writer of children's literature, supporting her large family with her writing, the title of the book refers to the children in the book: Tom, Julian, Philip, Elsie, Dorothy, Hedda, Griselda, Florence, Charles/Karl, Phyllis and others, following each as they approach adulthood and the terrors of war.
In an interview with The Guardian Byatt says: "I started with the idea that writing children's books isn't good for the writers' own children. There are some dreadful stories. Christopher Robin at least lived.

Shadows in the Grass