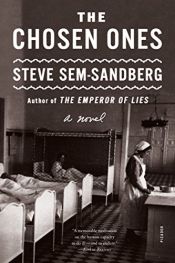 The Chosen Ones: A Novel

An absorbing, emotionally overwhelming novel, rich in incident and character, The Chosen Ones is obliquely illuminated by Sem-Sandberg’s sharp sense of the absurd.

The Am Spiegelgrund Clinic, in glittering Vienna, masqueraded as a well-intentioned reform school for wayward boys and girls and a home for chronically ill children. The reality, however, was very different: in the wake of Germany’s annexation of Austria during WWII, the clinic’s doctors, nurses, and teachers created a monstrous parody of the institution’s benign-sounding brief. The Nazi regime’s euthanasia program would come to determine the fate of many of the clinic’s inhabitants.

Through the eyes of a child inmate, Adrian Ziegler, and a nurse, Anna Katschenka, award-winning novelist Steve Sem-Sandberg explores the very meaning of survival in this profoundly moving and dramatic novel that bears witness to oppression and injustice during an intolerable period of Austria’s past.

A Glass of Blessings

The Song Before It Is Sung