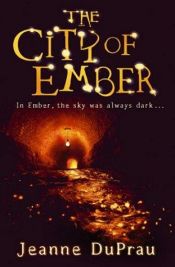 The City of Ember is a post-apocalyptic science fiction novel by Jeanne DuPrau that was published in 2003. Similar to Suzanne Martel's The City Under Ground published in 1963 and Helen Mary Hoover's This Time of Darkness published in 1980, the story is about Ember, an underground city that is slowly running out of power and supplies due to its aging infrastructure. The young protagonist, Lina Mayfleet, and her friend, Doon Harrow, manage to decode a message and follow clues left behind by the original builders of the City of Ember that would lead them to safety in the outside world.
It is the first "Book of Ember" in the eponymous series, which also includes The People of Sparks, The Prophet of Yonwood, and the final installment The Diamond of Darkhold. In 2008, the book was adapted into a film by Walden Media and Playtone.
A graphic novel adaptation by comic book artist Niklas Asker was released on September 25, 2012.

loved this so much

Book of a Thousand Days