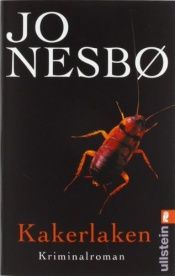 Cockroaches is a crime novel by Norwegian writer Jo Nesbø, the second in the Harry Hole series.
The Norwegian Ambassador to Thailand is found stabbed to death in a very questionable motel on the outskirts of Bangkok. Harry Hole - a highly insubordinate police officer and an alcoholic to boot, but also the most brilliant detective of the Crime Squad in Oslo - is sent to work with the Thai Police in solving the crime before the scandal hits the newspaper headlines.
Harry's first stop in Bangkok is the Norwegian Embassy - where he quickly uncovers seething passions just under the surface. The deep professional rivalry between career diplomats and political appointees mixes with the shameful secrets of the Ambassador's family and the tangled personal lives of other Embassy staff, Norwegian diplomats and Thai employees alike.
Harry discovers that the Ambassador had lost heavily in betting on horse racing - a very popular pastime in Thailand - and had become indebted to notorious loan sharks.