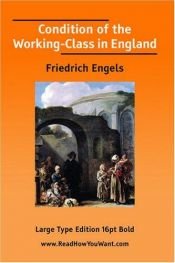 The Condition of the Working Class in England

The Condition of the Working Class in England is a 1845 book by the German philosopher Friedrich Engels, a study of the industrial working class in Victorian England. Engels' first book, it was originally written in German as Die Lage der arbeitenden Klasse in England. It was written during his 1842–44 stay in Manchester, the city at the heart of the Industrial Revolution, compiled from Engels' own observations and detailed contemporary reports.
In Condition, Engels argues that the Industrial Revolution made workers worse off. He shows, for example, that in large industrial cities such as Manchester and Liverpool, mortality from disease was four times that in the surrounding countryside, and mortality from convulsions was ten times as high. The overall death-rate in Manchester and Liverpool was significantly higher than the national average. An interesting example shows the increase in the overall death-rates in the industrial town of Carlisle where before the introduction of mills, 4,408 out of 10,000 children died before reaching the age of five, and after their introduction the figure rose to 4,738.

The Age of Consent

The Vision of the Anointed Self - Congratulation as …

The Truth About Markets