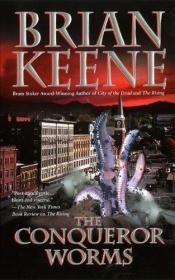 The Conqueror Worms is a post-apocalyptic themed horror novel written by author Brian Keene. "Earthworm Gods" was a 9,000 word short story that simultaneously was printed in 4x4 and No Rest For The Wicked. An indirect sequel to this tale, the 19,000 word novella The Garden Where My Rain Grows, appeared in Fear Of Gravity; it was set in the same world, but the characters and situation was differed.
These two tales, short story and novella, were later re-imagined as an 85,000 word novel entitled Earthworm Gods that was published by Delirium Books. The title was altered to The Conqueror Worms when the paperback edition was released by Leisure Books, but the content was the same.