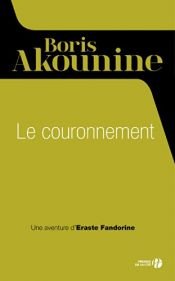 The Coronation is a historical detective novel by Boris Akunin, published originally in 2000. It is subtitled великосветский детектив. This novel was published in English in February 2009.
The scene of this seventh novel in the Erast Fandorin series is set in 1896 Moscow, at the time of the coronation of Tsar Nicholas II. Akunin prominently features the Khodynka Tragedy of 18 May 1896, when nearly 1400 people were killed when a crowd at the coronation festival stampeded.
The book won the Russian Anti-Booker prize in 2000 for prose. Many Akunin fans in Russia state this book is his best, reading about the tragic atmosphere of late 19th century Russia. However, members of the Russian Orthodox Church objected to the negative portrayal of many members of the Romanov family, especially the characterization of the character Grand Duke Simeon Alexandrovich as a homosexual.

The State Counsellor: The Further Adventures of Fan …

Murder on the Leviathan

The Death of Achilles