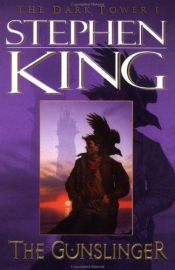 The Dark Tower: The Gunslinger

In this first novel in his epic fantasy masterpiece, Stephen King introduces readers to one of his most enigmatic heroes, Roland of Gilead, the Last Gunslinger. He is a haunting figure, a loner, on a spellbinding journey into good and evil, in a desolate world which frighteningly echoes our own. In his first step towards the powerful and mysterious Dark Tower, Roland encounters an alluring woman named Alice, begins a friendship with Jake, a kid from New York, and faces an agonising choice between damnation and salvation as he pursues the Man in Black. Both grippingly realistic and eerily dreamlike, THE GUNSLINGER leaves readers eagerly awaiting the next chapter. And the Tower is closer...

An epic novel which got me started on the series. I love the satires on life and character.

An incredible imagination is on display here. I absolutely love the setting and the constant mystery at play here. At least in this first book, you're never really told why exactly the world is the way it is, and in general a lot of the supernatural events aren't at all explained. It's up to you to put the pieces together in your head and I really enjoy that. That being said, I do feel this book took a little while to grip me while it built up the world, which is perfectly understandable. Once it did, I simply couldn't put it down, and have quickly gotten through the first 1/3rd of the next book. I highly reccomend this to anybody who likes the idea of Western + fantasy/supernatural. An awesome mix and I have thrilled to have discovered this series.