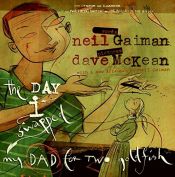 The Day I Swapped My Dad for Two Goldfish is a book by Neil Gaiman and Dave McKean, first published in 1997 by White Wolf Publishing. It was republished in 2004 by Harper Children's with a new cover and afterword. The story is a retelling of the old tale of an object that gets swapped from person to person, until the original owner needs it back—and then has to swap possessions back again, step by step, to retrieve it.
It is also available in Spanish, French, Italian, Croatian, and Portuguese.
McKean adapted the cover artwork from The Day I Swapped My Dad for the 1999 Counting Crows album This Desert Life.

The Wolves in the Walls

A Series of Unfortunate Events, Book 3 : The Wide W …