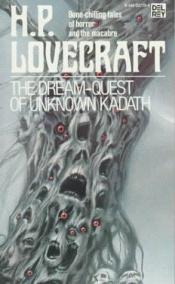 The Dream-Quest of Unknown Kadath

The Dream-Quest of Unknown Kadath is a novella by H. P. Lovecraft. Begun probably in the autumn of 1926, it was completed on January 22, 1927 and was unpublished in his lifetime. It is both the longest of the stories that make up his Dream Cycle and the longest Lovecraft work to feature protagonist Randolph Carter. Along with his 1927 novel The Case of Charles Dexter Ward, it can be considered one of the significant achievements of that period of Lovecraft's writing. The Dream-Quest combines elements of horror and fantasy into an epic tale that illustrates the scope and wonder of humankind's ability to dream.
The story was published posthumously by Arkham House in 1943. Currently, it is published by Ballantine Books in an anthology that also includes "The Silver Key" and "Through the Gates of the Silver Key." The definitive version, with corrected text by S. T. Joshi, is published by Arkham House in At the Mountains of Madness and Other Novels and by Penguin Classics in The Dreams in the Witch-House and Other Weird Stories.