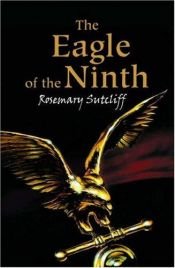 The Eagle of the Ninth

The Eagle of the Ninth is a historical adventure novel for children written by Rosemary Sutcliff and published in 1954. The story is set in Roman Britain in the 2nd century AD, after the building of Hadrian's Wall.
The Eagle of the Ninth is one of Sutcliff's earlier books, but may be her best-known title. It is the first in a sequence of novels, followed by The Silver Branch, Frontier Wolf, The Lantern Bearers, Sword at Sunset, Dawn Wind, Sword Song, and The Shield Ring. The sequence loosely traces a family, of the Roman Empire and then of Britain, who inherit an emerald seal ring bearing the insignia of a dolphin. The book has also been published as The Eagle. It has been adapted a few times, most notably as the 2011 film The Eagle.

The Eagle and the Wolves