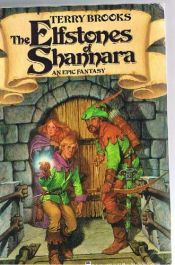 The Elfstones of Shannara

The Elfstones of Shannara is an 1982 epic fantasy novel by Terry Brooks. It is the first sequel to The Sword of Shannara and the second book in The Original Shannara Trilogy. It expands upon the history of the Elves, which was only hinted at in the preceding story, and follows Wil Ohmsford, grandson of Shea and inheritor of the Elfstones.
The novel, set in a fictional world called the Four Lands, consists of two intertwining plotlines. The first plotline follows the quest of protagonists Wil Ohmsford and Amberle Elessedil to create a new Ellcrys, a magical tree that serves to banish all Demons from the Four Lands. To do this, they must locate a specific place in the Four Lands called Safehold, where the process of creating a new Ellcrys can begin. The second plotline focuses on the efforts of the Elven army and their allies to slow a massive Demon invasion, made possible by the dying of the current Ellcrys, to give Wil and Amberle enough time to complete their quest.

The Wishsong of Shannara

The Talismans of Shannara

Shadow of a Dark Queen

Prince of the Blood

A Knight of the Word

Rage of a Demon King