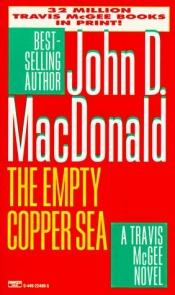 The Empty Copper Sea is the seventeenth novel in the Travis McGee series by John D. MacDonald. In it, McGee looks into the apparent drowning of Hub Lawless in a boating accident. His $2 million insurance policy leads some to believe he has faked his death.
The title of the book is taken from a passage in Chapter 13 on page 218 of the first printing of the hardcover edition. The sentence reads "I turned my head and saw, beyond the shoulder of my beloved, the empty copper sea, hushed and waiting, as if the world had paused between breaths."
The novel was adapted as the television movie Travis McGee, starring Sam Elliott. The film abandoned the Florida locales in favor of California.

The Cat Who Came to Breakfast

Death of a Gentle Lady

Murder between the covers

A Duty to the Dead