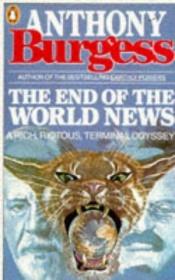 The End Of The World News

The End of the World News is a 1982 novel by British author Anthony Burgess.
Presented without chapter breaks, the plot weaves together three storylines. One follows Leon Trotsky on a journey to New York City shortly before the Russian Revolution of 1917. This story is written as the libretto of an Off-Broadway musical. A second tale covers the life and career of Sigmund Freud and includes portrayals of Havelock Ellis and Krafft-Ebing. The third part is set in the future, shortly before the impact of a rogue, extrasolar planet with the Earth. Because of the latter story line, it is considered a work of fantastic fiction.
Reviewing the book for the New York Times, Anatole Broyard concluded that "Mr. Burgess might have written a very good science-fiction novel if he had been more interested in entertaining the reader rather than himself."

A Sight for Sore Eyes