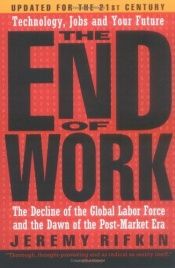 The End of Work

The most significant domestic issue of the 2004 elections is unemployment. The United States has lost nearly three million jobs in the last ten years, and real employment hovers around 9.1 percent. Only one political analyst foresaw the dark side of the technological revolution and understood its implications for global employment: Jeremy Rifkin.

The End of Work is Jeremy Rifkin's most influential and important book. Now nearly ten years old, it has been updated for a new, post-New Economy era. Statistics and figures have been revised to take new trends into account. Rifkin offers a tough, compelling critique of the flaws in the techniques the government uses to compile employment statistics.

The End of Work is the book our candidates and our country need to understand the employment challenges-and the hopes-facing us in the century ahead.

Throwing the Elephant: Zen and the Art of Managing …