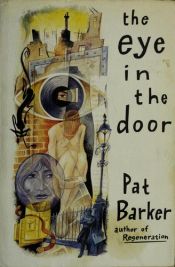 The Eye in the Door is a novel by Pat Barker, first published in 1993, and forming the second part of the Regeneration trilogy.
The Eye in the Door is set in London, beginning in mid-April, 1918, and continues the interwoven stories of Dr William Rivers, Billy Prior, and Siegfried Sassoon begun in Regeneration. It ends some time before the conclusion of the First World War later the same year. The third part of the trilogy, The Ghost Road, continues the story.
Whereas Regeneration is an anomalous, but not unique, mixture of fact and fiction, The Eye in the Door acknowledges real events, including the campaign against homosexuals being waged that year by right-wing MP Noel Pemberton Billing, but remains consistently within the realm of fiction. This grants Barker more freedom to explore her characters and their actions, the descriptions of which might be considered slanderous if attributed to real people. A major theme of the book, Prior's intense and indiscriminate bisexuality, is effectively contrasted with Rivers's tepid asexuality and Sassoon's pure homosexuality.