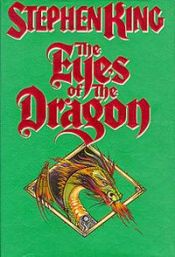 The Eyes of the Dragon is a novel by Stephen King that was first published as a limited edition slipcased hardcover by Philtrum Press in 1984, illustrated by Kenneth R. Linkhauser. The novel would later be published for the mass market by Viking in 1987, with illustrations by David Palladini. This trade edition was slightly revised for publication. The 1995 French edition did not reproduce the American illustrations; it included brand new illustrations by Christian Heinrich.
At the time of publication, it was a deviation from the norm for King, who was best known for his horror fiction. This book is a work of classic fantasy, with a clearly established battle between good and evil, with magic playing a lead role. The Eyes of the Dragon was originally titled Napkins.