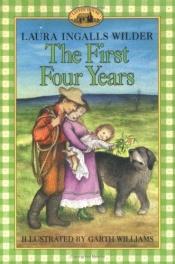 The First Four Years is a book written by Laura Ingalls Wilder which Roger Lea MacBride found in the belongings of her daughter Rose Wilder Lane while going through Rose's estate after her death in 1968. Laura wrote all of her books in pencil on dime store tablets, and the manuscript of The First Four Years was found in manuscript form as Laura had written it.
It is not clear whether Laura intended this first draft to be a ninth book in her Little House on the Prairie series, or possibly a standalone novel for adults; much of the material is more for an adult audience than anything in her Little House books. She seems to have written the extant first draft sometime around 1940, and then apparently lost interest in the project. Roger MacBride, the adopted grandson of Rose Wilder Lane, and executor of her estate, made a decision to publish The First Four Years without any editing so it came directly from Laura's pencil to the written page.