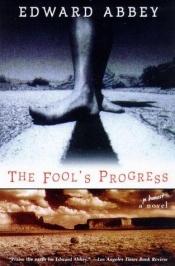 The Fool's Progress is a novel written by American author Edward Abbey, published in 1988.
The book is a semi-autobiographical novel about a man, Henry Holyoak Lightcap, who refuses to submit to modern commercial society. Unlike Abbey's most famous fiction work, The Monkey Wrench Gang, which concerns the use of sabotage to protest environmentally damaging activities in the American Southwest, The Fool's Progress focuses on the journey of Henry across America. Edward Abbey considered it to be his "fat masterpiece." It was the final book published in his lifetime; his final novel was Hayduke Lives.