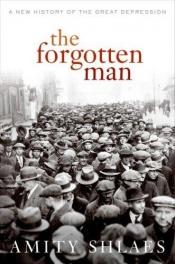 The Forgotten Man: A New History of the Great Depression

The Forgotten Man: A New History of the Great Depression is a book by Amity Shlaes and published by HarperCollins in 2007. The book is a re-analysis of the events of the Great Depression, generally from a free-market perspective. The book criticizes Herbert Hoover and the Smoot-Hawley Tariff for their role in exacerbating the Depression through government intervention. It criticizes Franklin D. Roosevelt for erratic policies that froze investment and for failing to take the steps needed to stop the Depression. Shlaes criticizes the New Deal for extending the length of the Depression and for its effects on individuals.
Shlaes praises the model offered by Wendell Willkie before the 1940 presidential election, where the New Deal would have been scaled back and business would have stepped in.
The book begins with an anecdote of the 1937 recession, eight years after the Depression began, when Roosevelt adopted budget-balancing policies indistinguishable from the stereotype of what Hoover supposedly did. Shlaes presents her arguments in part by telling stories of self-starters who showed what the free market could have accomplished without the New Deal.

When the Astors Owned New York: Blue Bloods and Gra …

The Conscience of a Liberal