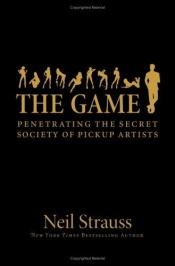 The Game: Penetrating the Secret Society of Pickup Artists

How to Win Friends and Influence People

The Art of Seduction