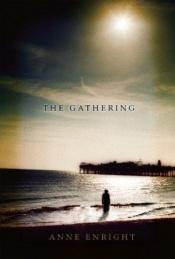 The Gathering is the fourth novel by Irish author Anne Enright. It won the 2007 Man Booker Prize, eventually chosen unanimously by the jury after having largely been considered an outsider to win the prize. Although it received mostly favorable reviews on its first publication, sales of the book had been modest before it was named as one of the six books on the Man Booker Prize shortlist in September 2007. After winning the prize, sales more than doubled compared to sales before the announcement. Enright described the book as "...the intellectual equivalent of a Hollywood weepie."
The novel traces the narrator's inner journey, setting out to derive meaning from past and present events, and takes place in Ireland and England. Its title refers to the funeral of Liam Hegarty, an alcoholic who committed suicide in the sea at Brighton. His mother and eight of the nine surviving Hegarty children gather in Dublin for his wake. The novel's narrator is 39-year-old Veronica, the sibling who was closest to Liam. She looks through her family's troubled history to try to make sense of his death.

A Fraction of the Whole

The Member of the Wedding