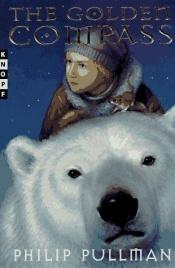 Northern Lights, known as The Golden Compass in North America, is a young-adult fantasy novel by Philip Pullman, published by Scholastic UK in 1995. Set in a parallel universe, it features the journey of Lyra Belacqua to the Arctic in search of her missing friend, Roger Parslow, and her imprisoned uncle, Lord Asriel, who has been conducting experiments with a mysterious substance known as "Dust". Northern Lights is the first book of a trilogy, His Dark Materials. Alfred A. Knopf published the first US edition April 1996, entitled The Golden Compass. Under that title it has been adapted as a 2007 feature film by Hollywood and as a companion video game. Pullman won the 1995 Carnegie Medal from the Library Association, recognising the year's outstanding children's book by a British subject. For the 70th anniversary of the Medal, it was named one of the top ten winning works by a panel, composing the ballot for a public election of the all-time favourite. Northern Lights won the public vote from that shortlist and was thus named the all-time "Carnegie of Carnegies" on 21 June 2007.

A very creative and funny adventure in an alternate universe with a lovely character named Lyra. The author successfully creates a fantasy in a universe where reality is very distinct from ours. The tone of mistery is balanced with action and intrigue and very amazing characters and their "deamons". This book has the correct pace to display the events in the storyline, not being too fast, not too slow! A real accomplishment!

A very creative and funny adventure in an alternate universe with a lovely character named Lyra.

One of the best young adult fantasy series I've read. Even though it's aimed at kids, I think adults can get something out of it too.