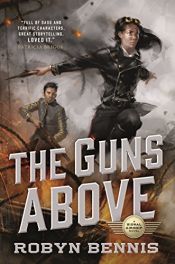 The Guns Above: A Signal Airship Novel

Robyn Bennis’s THE GUNS ABOVE is an adventurous military fantasy debut about a nation's first female airship captain.

They say it’s not the fall that kills you.

For Josette Dupre, the Corps’ first female airship captain, it might just be a bullet in the back.

On top of patrolling the front lines, she must also contend with a crew who doubts her expertise, a new airship that is an untested deathtrap, and the foppish aristocrat Lord Bernat, a gambler and shameless flirt with the military know-how of a thimble. Bernat’s own secret assignment is to catalog her every moment of weakness and indecision.

So when the enemy makes an unprecedented move that could turn the tide of the war, can Josette deal with Bernat, rally her crew, and survive long enough to prove herself?

A Darker Shade of Magic

A Conjuring of Light: A Novel (Shades of Magic)

A Gathering of Shadows

The Glass Books of the Dream Eaters