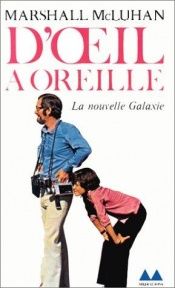 The Gutenberg Galaxy: The Making of Typographic Man is a 1962 book by Marshall McLuhan, in which he analyzes the effects of mass media, especially the printing press, on European culture and human consciousness. It popularized the term global village, which refers to the idea that mass communication allows a village-like mindset to apply to the entire world; and Gutenberg Galaxy, which we may regard today to refer to the accumulated body of recorded works of human art and knowledge, especially books.
McLuhan studies the emergence of what he calls Gutenberg Man, the subject produced by the change of consciousness wrought by the advent of the printed book. Apropos of his axiom, "The medium is the message," McLuhan argues that technologies are not simply inventions which people employ but are the means by which people are re-invented. The invention of movable type was the decisive moment in the change from a culture in which all the senses partook of a common interplay to a tyranny of the visual.

A short history of the printed word

The Cask of Amontillado

The justification of Johann Gutenberg

An Essay on Typography

Telling the truth : The Gospel as tragedy, comedy, …

Aldus and his dream book

I Only Say This Because I Love You