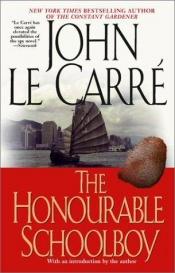 The Honourable Schoolboy is a spy novel by John le Carré. George Smiley tries to reconstruct an intelligence service and to run a successful offensive espionage operation to save the service from being dismantled by the government. The "Honourable Schoolboy" of the title is Gerald Westerby, a British spy sent to Hong Kong.
The Honourable Schoolboy is the second novel of the informal "Karla Trilogy" and won the James Tait Black Memorial Prize for 1977. It was later anthologised in The Quest for Karla, an omnibus edition of the Smiley books. In 1977, the book won the Gold Dagger award for the best crime novel of the year.

The Tailor of Panama