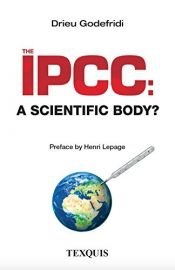 The IPCC: A scientific body?

THE IPCC: A SCIENTIFIC BODY?


Resolutely against the grain, the author of this essay claims that the IPCC

(Intergovernmental Panel on Climate Change) is a fraud consisting in presenting

an essentially political initiative as scientifi c, and that this fraud is the greatest

in modern science due to its blinding and planetary success.

science. The author suggests that the debate within the IPCC, which deals with

the exact sciences, be distinguished from the debate on the IPCC, which is of

an epistemological nature, that is to say institutional, logical, methodological.

on the IPCC.” Henri Lepage, economist

“A very interesting essay, particularly the analysis of the IPCC’s composition

and the misuse of the term Science.” Guy Sorman, essayist

“This text is an absolute delight, a perfect analysis of logic and of the motivations

“This essay is a brilliant exercise in mental hygiene and public health.”

“This book is excellent, very interesting and very important from a sociological

in these last few years. The great force of this excellent book is its brilliant

defense of a provocative thesis in a perfectly balanced way.”

The Land of Little Rain

Enough: Breaking Free from the World of More

Who Turned Out the Lights?: Your Guided Tour to the …

A whale for the killing