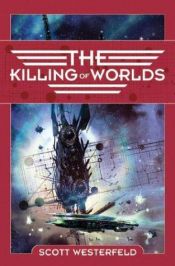 The Killing of Worlds is a science fiction novel by Scott Westerfeld.
The events detailed below immediately follow those of the novel The Risen Empire.
Imperial Captain Laurent Zai is sent on a suicide mission to defeat an incursion by the Rix, a space-faring nation who worship planet-sized artificial intelligences. The planet he is protecting from the Rix is home to a newly emergent AI named Alexander, which the local population is helpless to remove. Although severely outclassed, and in spite of deadly mutineers, Captain Zai is successful in destroying his Rix opponent; he also discovers that the Rix ship was shielding and transporting a vast swarm of silicon particles.
Alexander uses the help of a surviving Rix commando and her Imperial lover to project his consciousness into space, inhabiting the silicon particles as an independent entity. Although political guardians on Captain Zai's ship try to prevent it, he makes peaceful contact with both Alexander and with the Rix commando. From them, he learns the greatest secret of his Emperor; the Emperor's claim that he can revive people from death and give them an eternal post-life is false.