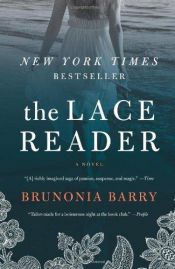 The Lace Reader is a novel by Brunonia Barry. The novel is set in Salem, Massachusetts, the American town famous for the Salem witch trials.
The novel came to be well known for its unusual route to mainstream publishing. Originally self-published by the author it became a local success story, got rave reviews in many places including Publishers Weekly, and was eventually picked up by the US branch of HarperCollins in a multi-million dollar deal.
It soon became a New York Times bestseller and is currently under option for a film. Rumoured casting includes Rachel McAdams as the lead character, Towner Whitney.
When asked about her inspiration for the book, Barry said, as reported on her blog:
For quite some time, I have been fascinated by the Hero’s Journey or the monomyth. Most stories that follow this pattern have a decidedly male orientation: a lone individual acts heroically and saves the day. I wondered if there might be an alternate form, a feminine Hero’s Journey. So I began to look at stories that featured female protagonists to see if they offered something different. What I found surprised me.

Knitting Under the Influence