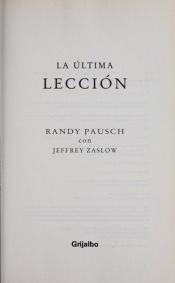 The Last Lecture is a New York Times best-selling book co-authored by Randy Pausch—a professor of computer science, human-computer interaction, and design at Carnegie Mellon University in Pittsburgh, Pennsylvania—and Jeffrey Zaslow of the Wall Street Journal. The book was born out of a lecture Pausch gave in September 2007 entitled "Really Achieving Your Childhood Dreams".
The book has often been compared with Mitch Albom's Tuesdays with Morrie, a book on lessons the author learned from his dying college professor. When asked about his knowledge of the book, Pausch replied that he had never read that book, and commented that he "didn’t know there was a dying-professor section at the bookstore". Speculation that the book would be turned into a movie was turned down by Pausch himself.

A Child Called "It"

Born On A Blue Day: inside the extraordinary mind o …

The time of my life